ISN'TSES & RAXIL4 AT EPPING FOREST 2020
​Originally broadcast 31 Oct 2020 as part of Sonic Electronics + IKLECTIK (off-site) Halloween livestream
Isn'tses is our noise duo.
This is a 3 minute video of the artist procession through Atina. My costume was inspired by the Mefitis goddess of the volcano, also under the umbrella of the Black Madonna "this holy icon of universal motherhood has been persistently associated with the articulation of empowering strategies, with antagonism towards any kind of patriarchal restraints, with the healing of deeply ingrained divisions (of gender, class, ethnicity), and with the celebration of diversity in unity" - Elisabetta Marino
We wandered through the streets of Atina at night bringing our costumes together in a juxtaposition of spontaneous theatrical disobedience. The music is an extract from my musical performance which incorporated collected field recordings of Atina and the surrounding area. Listen Lisse Nnja Riot
Also in the procession are: Ali Darke with umbrella and rats tail Alexandra Santos conjuring the horned deity Riitta Hakkarainen wearing a giant nun hat that she made Jude Cowan Montague a gold faced roman statue.
Filmed by Marisa Polin
We (Isn'tses - Lisa McKendrick/Tim Drage) teamed up with Howard from Pillars of Golden Misery. We collaborated on the visuals mixing drawing by Lisa McKendrick, 8-bit footage from Isn'tses and computer generated visuals by Howard.  This performance was for Skronkdrone.
​I was using the modular box which I have built. I built a dredrum from a kit and hacked my Nux Timecore, guitar fx pedal, soldered a new pcb to convert it to modular and housed it in a brand new modular plate designed by Shane Williams. I also have built the echo module from a kit.  All together I've not spent my life savings on a modular box but I've made some cool things that work well together.
For this performance I also utilised a giant pink stocking and light toys as part of the performance.
Lisa McKendrick and Jude Cowan Montague collaboration at Steep 12, 25th of May
The Intimate Space at St Mary's Tower
​https://www.facebook.com/events/765214597205364/

Review of Steep in The Sunday Tribune
​www.thesundaytribune.com/2019/05/26/the-fertile-power-of-the-orphan-tower/?fbclid=IwAR3oA7yxQqGDdaVT0LmJDG1eumLavTxFJm887x12gf17LpAOsrvwUkgT8DQ
Isn'tses play live on Bad Punk and Talk about the Fort Processor
​Isn'tses is a collaboration between Lisa McKendrick and Tim Drage

Cult of Rammellzee at Laz Inc, Mayfair.
With Alexis Milne an Tex Royale
Participation in Feel the Noise - with Sharon Gal, Goldsmiths 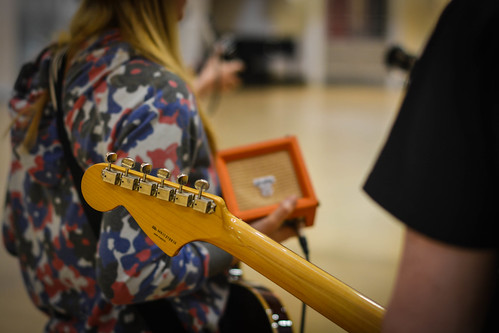 Collaboration with Vishscale - Nnja Riot on vocals
Isn'tses is an exploration between Listen Lisse and Cementimental. Drawing on elements of both harsh noise and folk.
www.isntses.co.uk